It’s surprising to know that rolling pins were first used in the early 9th century BC by the Etruscans. They were the first civilization to have used the rolling pin, which was just a simple carved wood cylinder. Because of its efficiency, many people followed the tradition of using it.

But having no handle to grip-on hustles the bakers, so the African American inventor, J.W Reed, created a new type of rolling pin which has handles on both sides during the late 1800s and this was the birth of the design that is similar to what we use today. Now there are many versions. They differ in material construction like ceramic, glass, PVC, and classic wood.

How to Prevent Cookie Dough from Sticking to Rolling Pin:

Wax paper will help a lot in your frequent question, how to prevent cookie dough from sticking to the rolling pin. All you need to do is prepare the wax paper, and next is to estimate how much do you need to place on the surface where you will roll the dough.

Wondering why your dough always sticks in your rolling pin when you are doing the job, because of the rolling pin itself. You need to clean it regularly, especially if it is wooden. Cleaning it with warm water and dish soap will help prevent the dough from sticking with your rolling pin. With this method, the stocked oil that causes the dough to stick with a rolling pin will be removed.

Use a Non-Stick Cover!

All you need to do is lightly flour the surface where you will flatten it, then place your dough and sprinkle it with flour. After that, you can use your rolling pin and repeat the process of sprinkling flour until it releases the rolling pin. But remember, be too confined in using too much flour, you are baking, and this is not pottery.

Did you know that it is easy to roll a cold dough than a warm dough? That is a fact. Cold dough is easier to roll because it sticks less. So before you plan to roll it, don’t forget to chill it for 15 to 30 minutes. It will also save you time because while it is in the refrigerator, you can make the frosting!

Use a Non-Stick Spray!

Sticking cookie dough annoys anyone who is trying to make a delicious dessert. But don’t worry, Non-stick spray is on the way to help you solve your problem. All you need to do is buy one in the grocery store or favorite bakeware shop. When you have it, you are set to roll your cookie dough.

Don’t forget that you should spray first, the top of your dough, your rolling pin, and hands. This will perfectly prevent the dough from sticking, and it will also help maintain a clean surface without using the method of sprinkling flour. So why think too much on how to prevent cookie dough from sticking to rolling pin when you can end it in a single solution. Buy a non-stick spray!

Baking includes the process of flattening your dough, especially when we are making cookies. But sometimes it is frustrating to see when your cookie dough begins to stick in your rolling pin, and no matter how you roll it, it just keeps on sticking.

Don’t lose hope, and don’t let go of your dream of starting your baking career. It is not solely your fault. Now that we have shared with you’re the different techniques on how to prevent cookie dough from sticking to rolling pins. All you need to do is follow the tips, and you are set to make your signature desserts. Happy baking! Get more tips on rolling pins. 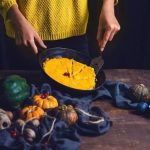